The Twin Falls School District Board of Trustees is pleased to announce Jorge Pulleiro as the new associate principal at Twin Falls High School. The new administrative hire was approved at the board meeting May 28, 2021. Pulleiro fills the role temporarily held by Mike Gemar who has retired.

Pulleiro currently serves as a Spanish language arts teacher at Wood River Middle School where he has worked since 2012. He started his career in education in 1991 as an English teacher in Buenos Aires, Argentina. In 1996, he became a Spanish instructor and district supervisor at the LDS Missionary Training Center in Provo, Utah. Pulleiro served in the U.S. Army from 1999 to 2005 where he worked as a human resources director. Upon completing his military service, he became a Spanish teacher at Grant Union Junior/Senior High School in John Day, Oregon from 2005 until 2012. He also served as an administrative intern at Wood River Middle School in 2014. 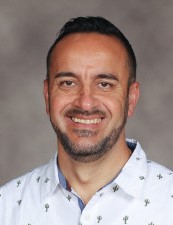 Pulleiro holds numerous accolades. He was named the 2021 Teacher of the Year for the State of Idaho. In 2011 Pulleiro took part in the Fulbright Teacher Exchange program that allowed him to work as an English professor at the Universidad Popular de La Chontalpa in Tabasco, Mexico. In 2014 he received recognition from the White House Department of Defense as a Spotlight Teacher. In 2008 He received the Loretta Wollet Award for outstanding teaching at the K-12 level from the Confederation in Oregon for Language Teaching.

“I am beyond grateful and thrilled for the opportunity that I have to be part of the amazing Twin Falls High School family. I can’t wait to become more familiar with the students, staff, parents, and everybody that makes Twin Falls HS the great school it is.  I am looking forward to welcoming our students back to school in August for a wonderful and engaging year.  I am ready to work together as a team in our school and community to ensure academic and social success for each of our students.” said Pulleiro.