As Twin Falls grows, population changes in our community can put unpredictable pressure on our schools. To address the ways neighborhoods are growing and changing, the TFSD has proposed shifting a section of the Rock Creek Elementary School Zone to Perrine Elementary School beginning with the start of the 2022-2023 school year. This change will move roughly 85 students from the Rock Creek Zone and will designate an area that is currently under development to be within the Perrine Zone as that area becomes populated. 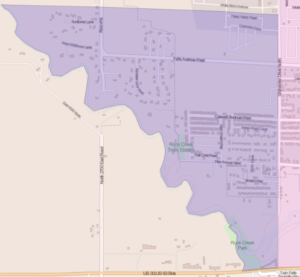 The affected area is west of Grand View Drive North, and south of White Birch Avenue, running along Rock Creek Canyon on the southwestern border. It encompassed Sunflower Lane, West Wildflower Lane, and Rimview Lane West to the southwest.

In 2014 with the opening of Pillar Falls and Rock Creek Elementary Schools, a group of community members helped the TFSD develop a new school attendance zone map that has served our district since that time. In 2019, the TFSD reconvened this committee to begin work evaluating needs to shift zones in an effort to address potential overcrowding at some schools. With the uncertainty brought on by the COVID pandemic, the TFSD paused this work but continued to monitor enrollment trends carefully. While most schools remain within their comfortable capacity, Rock Creek Elementary School has continued to grow and is now at a point where the attendance zone must be changed to alleviate overcrowding in the next school year.

TFSD administrators met with Perrine and Rock Creek Elementary School principals to evaluate the committee’s recommended changes to their school zones in early January. After review and further discussion, this group identified a section, containing roughly 85 students that could be moved to the Perrine Zone. The proposed move would make this group of students’ commute to school shorter, alleviate overcrowding at Rock Creek, and capture some of the area designated for future growth. The TFSD administration has proposed this change for the 2022-23 school year and has asked the School Board to take action at the Feb. 14 School Board Meeting in order to give affected families as much notice as possible prior to the start of next year. Affected students would have the option of applying for an out-of-zone transfer and the TFSD will accommodate as many requests as possible.

To help parents and families better understand the proposed changes and to introduce the affected families to the Perrine Community, Perrine Elementary School will be hosting an open house on Thursday, February 3 at 7 p.m. Families are invited to hear a brief presentation about the attendance zone change and how it came about and provide feedback about the proposal. This feedback will be presented to the School Board prior to the Feb. 14 board meeting. Please join us for this informational meeting.

Click the links below to see the proposed attendance zone maps.

Close up on the affected area (proposed).

Click Here to provide feedback about the proposed change.